The pass resembles a book with a pastel border and accent colors, one being blue-mint with pale accents, the other is pale pink with violet accents. The middle has a detailed border, along with a gem mickey head with a banner above it (white for dreamy, dark pink for shiny) that has writing that spells out Dream Passport. On both the top and bottom of this is a small gem (white for pink, blue for mint).

The inside lid resembles the outside but with less detail, while the opposide side resides the screen, which rests on a pale base. Beneath the screen is a gem (pink or blue) with a gold designed border. A pale colored "pen" is included. 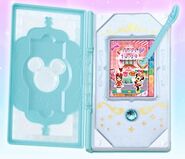 Add a photo to this gallery
Retrieved from "https://kirakira-shiny-star.fandom.com/wiki/Dream_Passport?oldid=1175"
Community content is available under CC-BY-SA unless otherwise noted.